This article was written by Jordan Hoch, a Verge PDC graduate and intern during our 2013 season. Using the expertise gathered from his own business, Gnome of My Own, he was instrumental in the installation of our underground water storage system. Everything from the design to the digging – Jordan was there making it happen.

As far as permaculture and journaling are concerned, I’m relatively new to both. It’s hard for me to sit here and write about something I don’t yet fully understand, through a medium I’ve rarely (if ever) used. So bear with me if I start to ramble, but here is my account of how we installed an underground water storage tank for rainwater collection.

One of the first things I vividly remember learning in Rob’s PDC was that when you are first analysing a piece of land you need to look at what yields of the land were already present, rather than thinking of what you can do to change the land to yield what you desire. For much of my career (I’m a landscaper by trade) I’ve pretty much been taught the opposite, which was basically to bend the will of the land until you have something pleasing to the eye of the customer.

For many years my mindset has mirrored that approach and my general attitude going into this internship was “what do I want to take from this?” I can tell you that I never got what I thought I wanted (and I had a huge mental list). I did find however, that I already had something that could be offered, and in collaboration with Verge and a lot of help from Rob, we put some of my unique skill sets to work and came up with an innovative solution to rainwater storage.

Rob was eager to get rid of the last patch of grass in his backyard and provide a nice communal patio area in its place. He approached me to help build the patio, and to teach him a thing or two about hardscaping in the process. Somewhere along the line an idea of using the space underneath the patio to store rainwater was tossed out, and what we came up with was essentially placing a pond underneath paving stones. It was to be made up of felt, pond liner, HDPE tubing, pea gravel, landscape fabric, sand and paving stone. We added several features to improve functionality such as an overflow that empties into the vegetable garden swale, a trench drain to improve water collection and direction, and a chamber which a sump can be lowered into for rapid draining and/or manual watering.

In order to properly build this we first had to dig out all existing soil underneath where the patio was to be. We had to get to clay in order to have a proper foundation that would resist any frost heave. We then proceeded to drill a hole in the concrete wall to where our standpipe overflow was going to come out. We proceeded to lay down the felt and then pond liner. The felt is there to protect the liner from any damage from sharp rocks. To be on the safe side we put another layer of fabric on top of the pond liner. We also installed the bulkhead at this point which will eventually connect to our overflow standpipe. Next we installed the HDPE pipe and port for the sump. We had drilled holes into the pipe before it was lowered in to maximize water infiltration. We chose to put in pipe rather than fill the entire subsurface of the patio with porous non-compatible aggregate as the water holding capacity would triple in the space the pipe was in. We capped the ends of the pipe to serve as retainment against the load of the soil pressing in from the sides. At this point we were simultaneously installing the overflow. We connected it directly into the HDPE pipe as the water in the pipe would be more free flowing that the water held within the pores in between the aggregate. Next we filled in all void spaces with a non-compactible rock. We chose a 14mm pea gravel as it was small enough to migrate its way in between the pipes but not large enough to get into them. As a side note it’s important that the aggregate being used be smooth round rocks. Jagged rocks will fail you in two ways in this application: 1) they run the risk of puncturing the pond liner 2) jagged rocks can be compacted and will settle over time causing your patio to sink. Next we installed the hexadrain system. This will be the lowest surface point of the patio where the water will naturally drain to. It is then channelled down the trench and through a leaf catcher that empties into the actual holding tank of the patio. From here we installed another layer of fabric and 1 inch of sand. The fabric is there to make sure the sand stays in place and doesn’t migrate into the tank. The sand is there to provide a base for the paving stones to sit and a similar size aggregate for the jointing sand so it won’t migrate lower either. Now we laid the paving stones (which we were able to salvage and re-use) and fill the cracks with envirobond, which causes the patio surface to now be one impermeable surface. (At this point any downspouts can be emptied onto the surface of this patio and the patio surface will direct that water into the trench drain system. The surface of the patio also acts as a rainwater harvesting surface now.) We added a cap to the sump barrel and finally we set the grade of the overflow on the stand pipe and directed it to the garden swale.

As far as the project went, I’m pretty pleased with it but there’s always room for improvement. In this particular patio (as with all patios) a lot of what we did was limited by the existing grades within the yard. A few things I would like to include in future designs (when possible):

You can watch a short video of the project on our blog post GAINS FROM CATCHING RAIN IN DRAINS: A VIDEO EXPLANATION OF THE RAIN TANK PROJECT 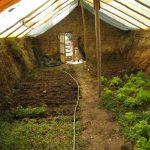 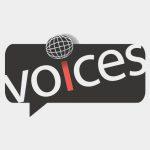 Win Tickets to See All the Biggest Names in Permaculture Under One Roof!Events, Featured, Joel Salatin