As an engineer and permaculture designer living in a cold-climate, I am particularly fascinated with the interplay between thermodynamics and design and with capturing “waste” energy and finding novel, inexpensive and efficient ways to store and/or recapture and re-use it. One of these such systems is geothermal storage.

In late 2015, our consulting company, Adaptive Habitat, was hired to design and install a geo solar heat collection system just north of Calgary, Alberta, underneath a Ready-To-Move (RTM) home. For R&D and monitoring purposes we decided to outfit the system with 11 temperature probes.

We have been really pleased with its performance to-date. Here is a summary of how it is designed and what we have observed so far.

What is Annualized Geosolar?

This system, which is also called an Annualized Geosolar (AGS) system, captures hot air from the attic in the spring, summer and fall and, using a fan, blows it underground beneath the home. The heat from the attic air transfers into the soil as it travels through the underground duct and then migrates slowly through the earth, returning to surface approximately six months later. This heats the crawlspace under the home during the winter months. The end result is a reduction in heating bills and increased comfort from a warm floor. Note that, in conventional design, the attic air would be simply discharged to atmosphere through a power vent – so we are not even increasing power consumption with this modification. In the first video, I describe how air circulates through the AGS System.

In this second video, I go into more detail about the system design and take you underneath the crawl space.

How The System is Performing

Here are two screenshots, showing the change in temperature over the course of six months that the system has been running. You can see that the ground temperature around the ducts started off frozen (0 deg C) and is now in the range of 15 – 20 deg C (59 – 68 F). Based on these initial results, and based on my experience with other geothermal storage projects, I am anticipating that for every unit of electricity that we use to move heat via the fan, we will get 13 units of heat returned into the home. That’s a Coefficient of Performance of  13!

Ideally, if you want to put something like this under your home or building, it needs to be thought out and designed ahead of time. It would be possible to use this system in a retrofit but it would be less efficient and more expensive to install.

To install the system, we dug a trench down the center of the house pad, and used low cost materials such as two 50-gallon drums and 4.5-inch weeping tile for the inlet / outlet and duct work. We also had to bring a duct from the attic down into the crawl space. Material cost was around $3,500 CAD. We did have an excavator dig the trench, but he was there anyway, digging the trenches for the eco-septic field that we also designed and installed (more on that in a later post).

Once the duct was laid, we covered and heavily compacted around the ducts, both to eliminate settling and improve contact with the soil (thus improving thermal conductivity).

Then we laid burial grade expanded polystyrene as the insulative layer, which delays the captured heat by ~ six months. Basically, the heat is forced to travel a longer horizontal distance, preventing it from returning before we need it. This reduces the depth at which we need to install the ducting. 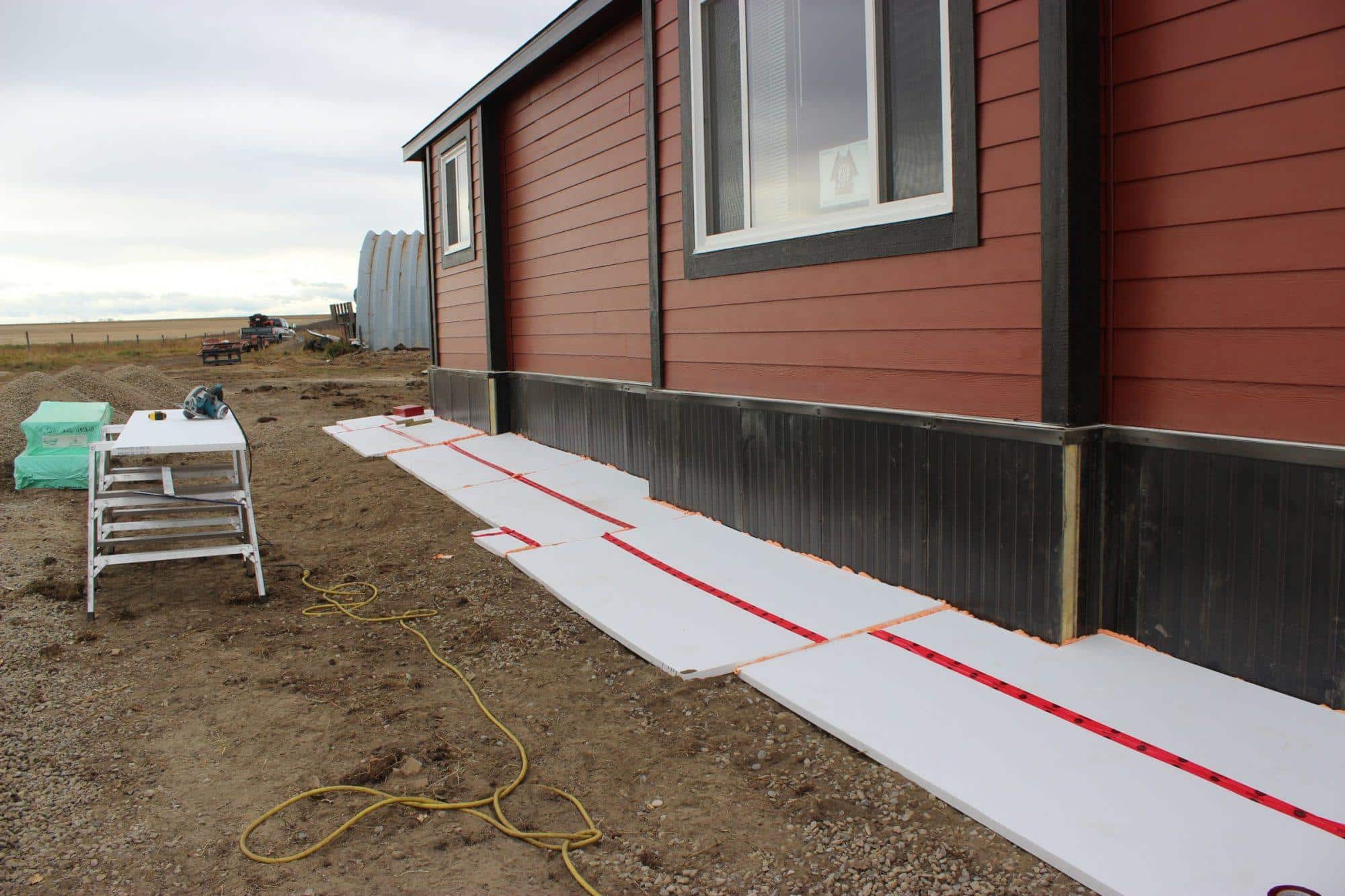 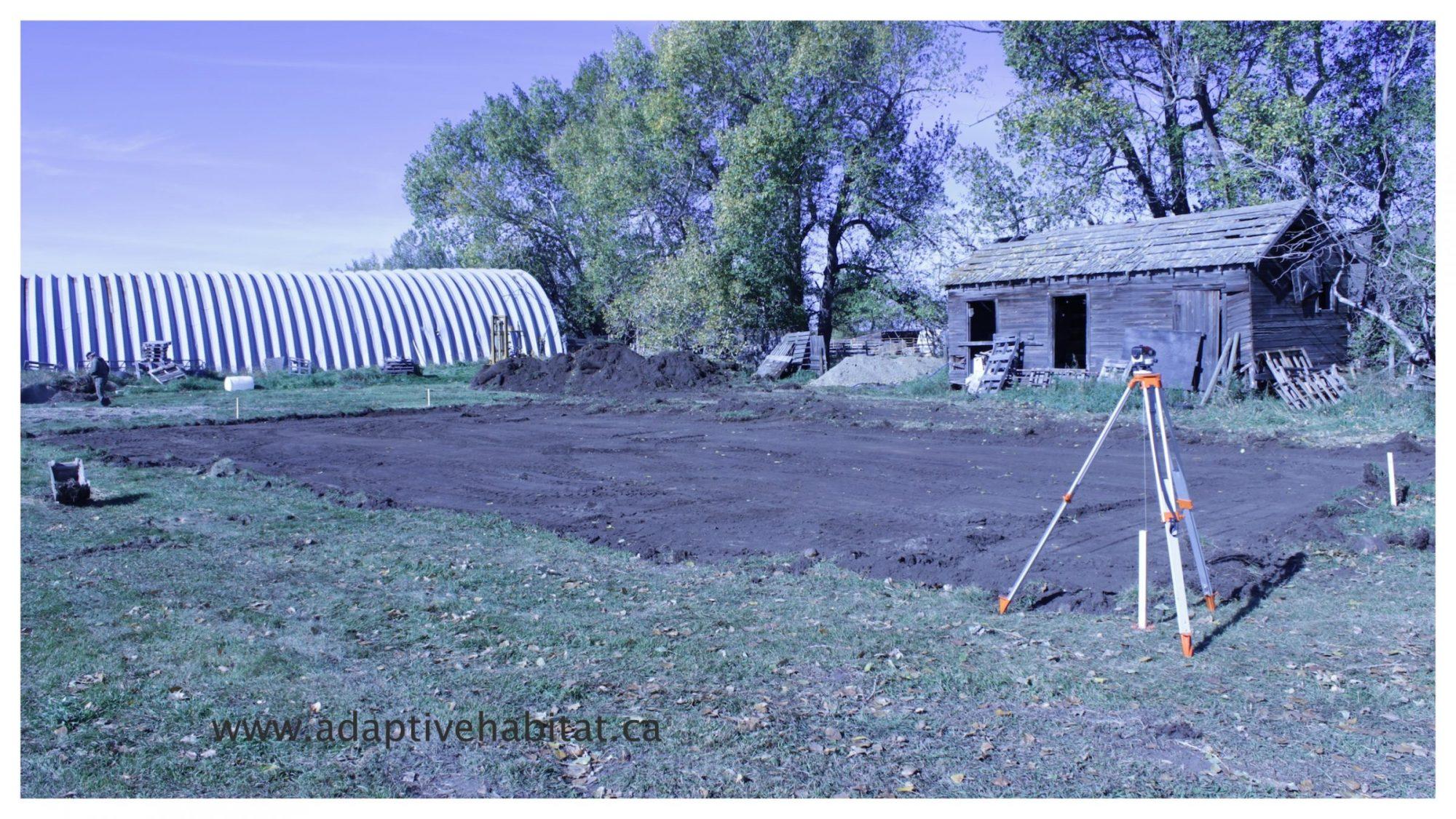 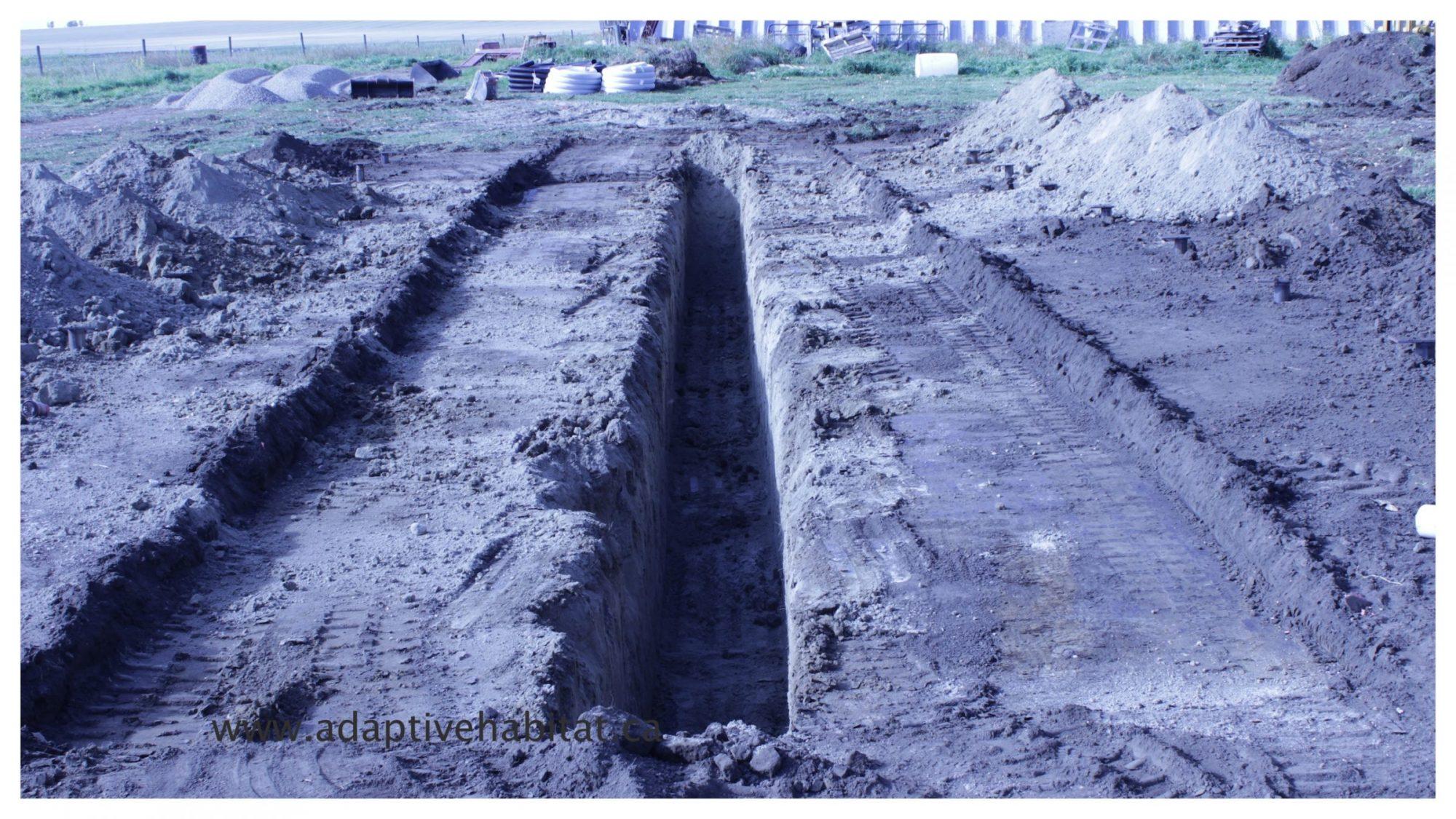 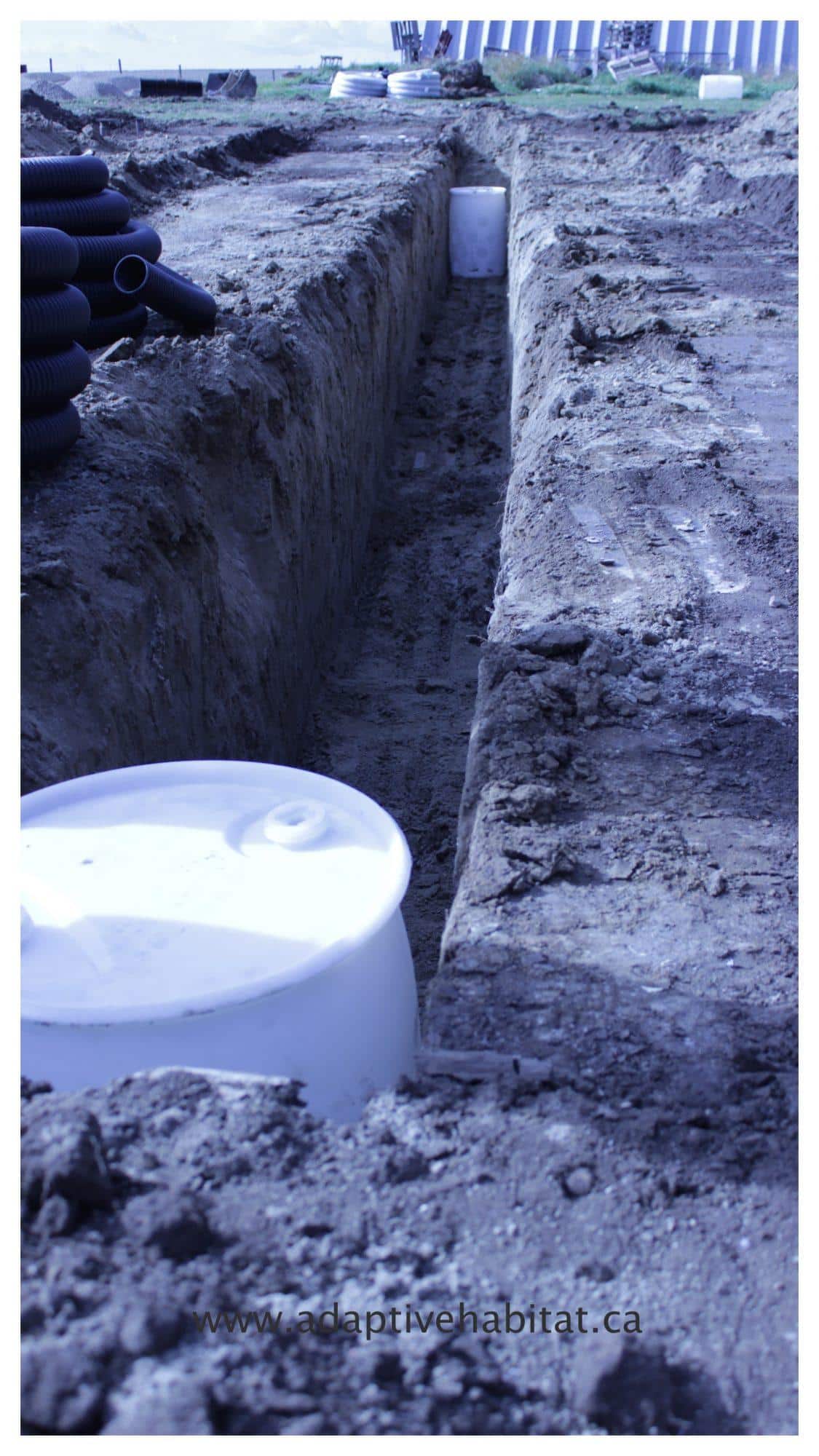 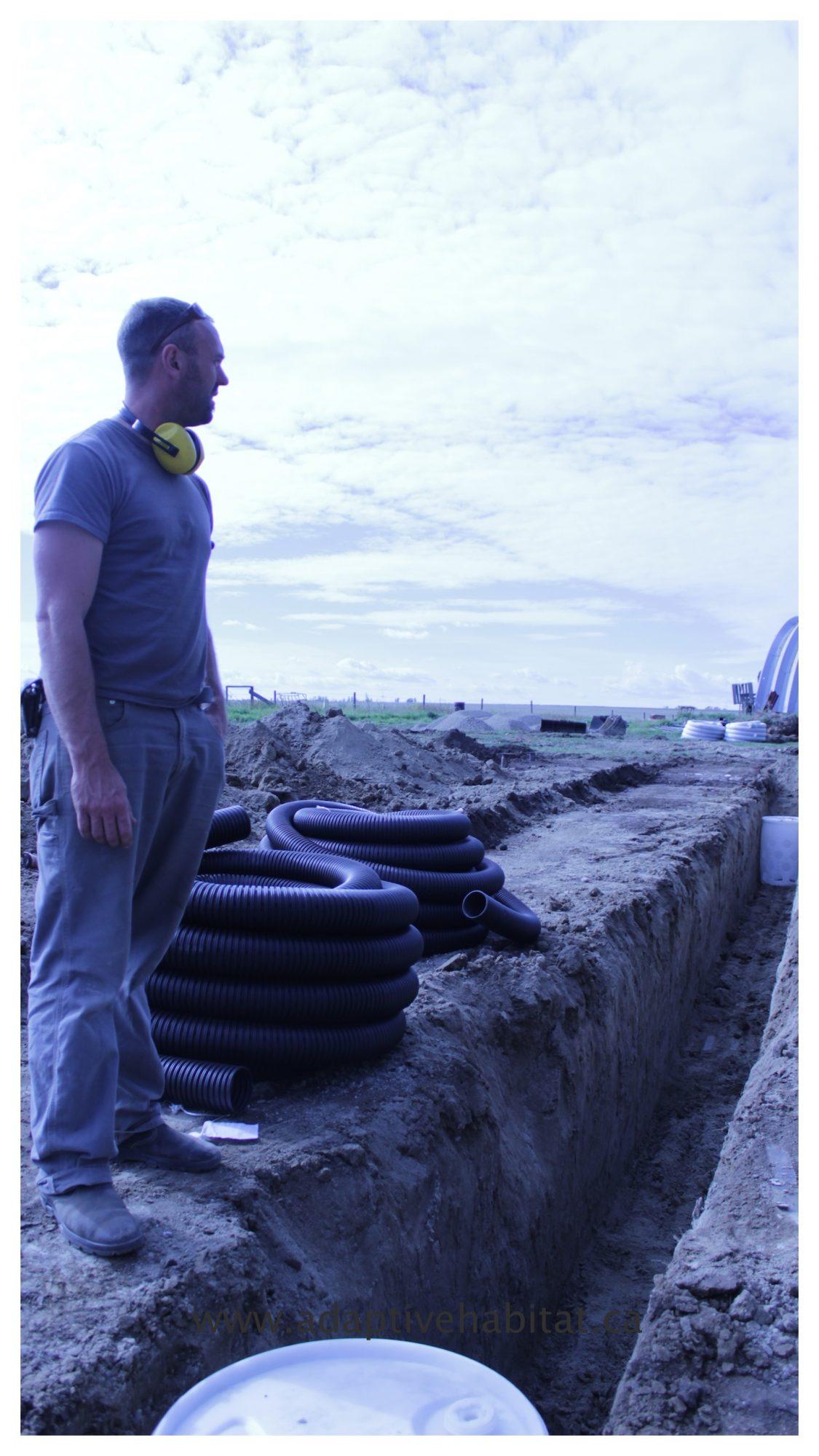 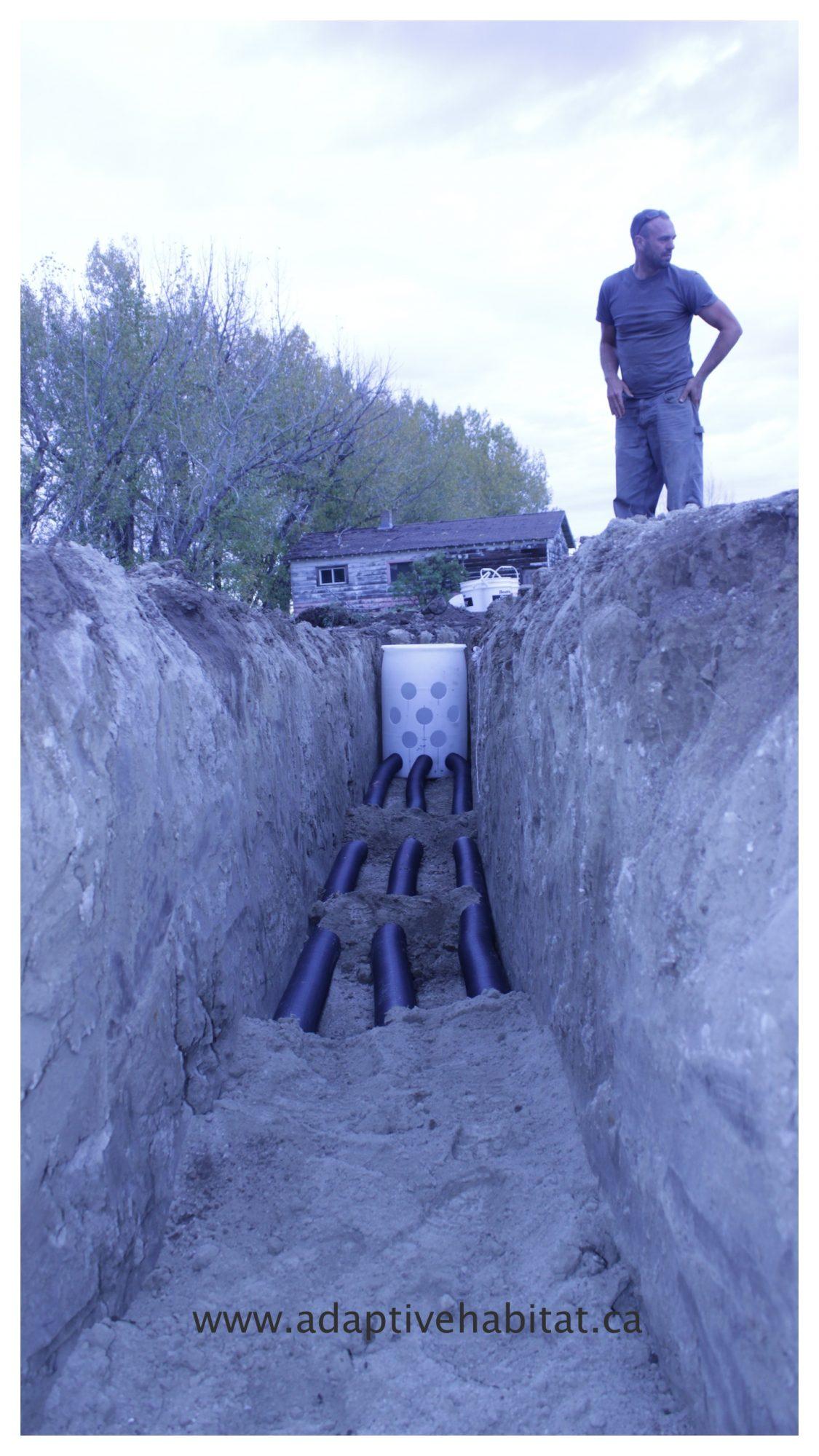 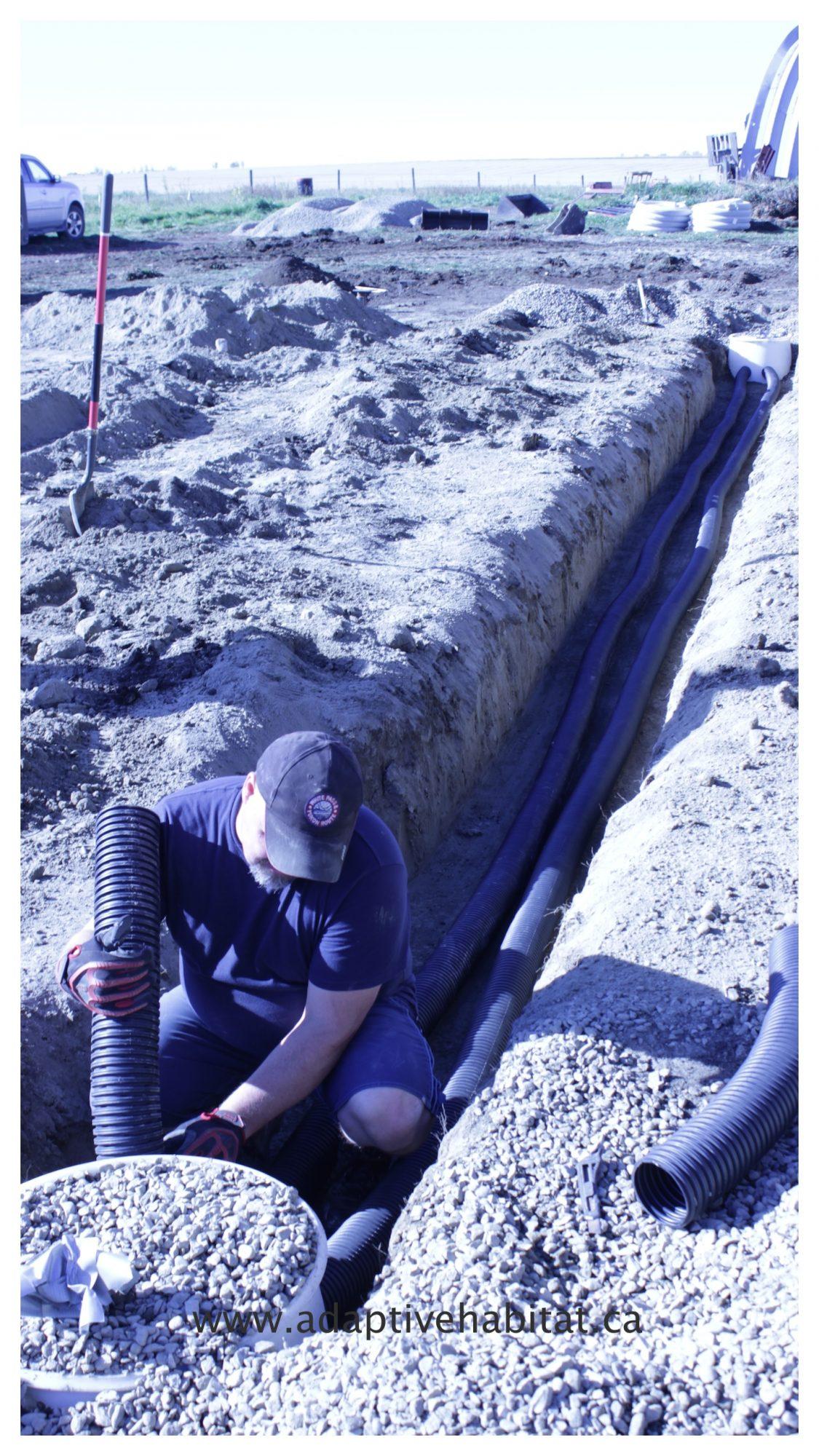 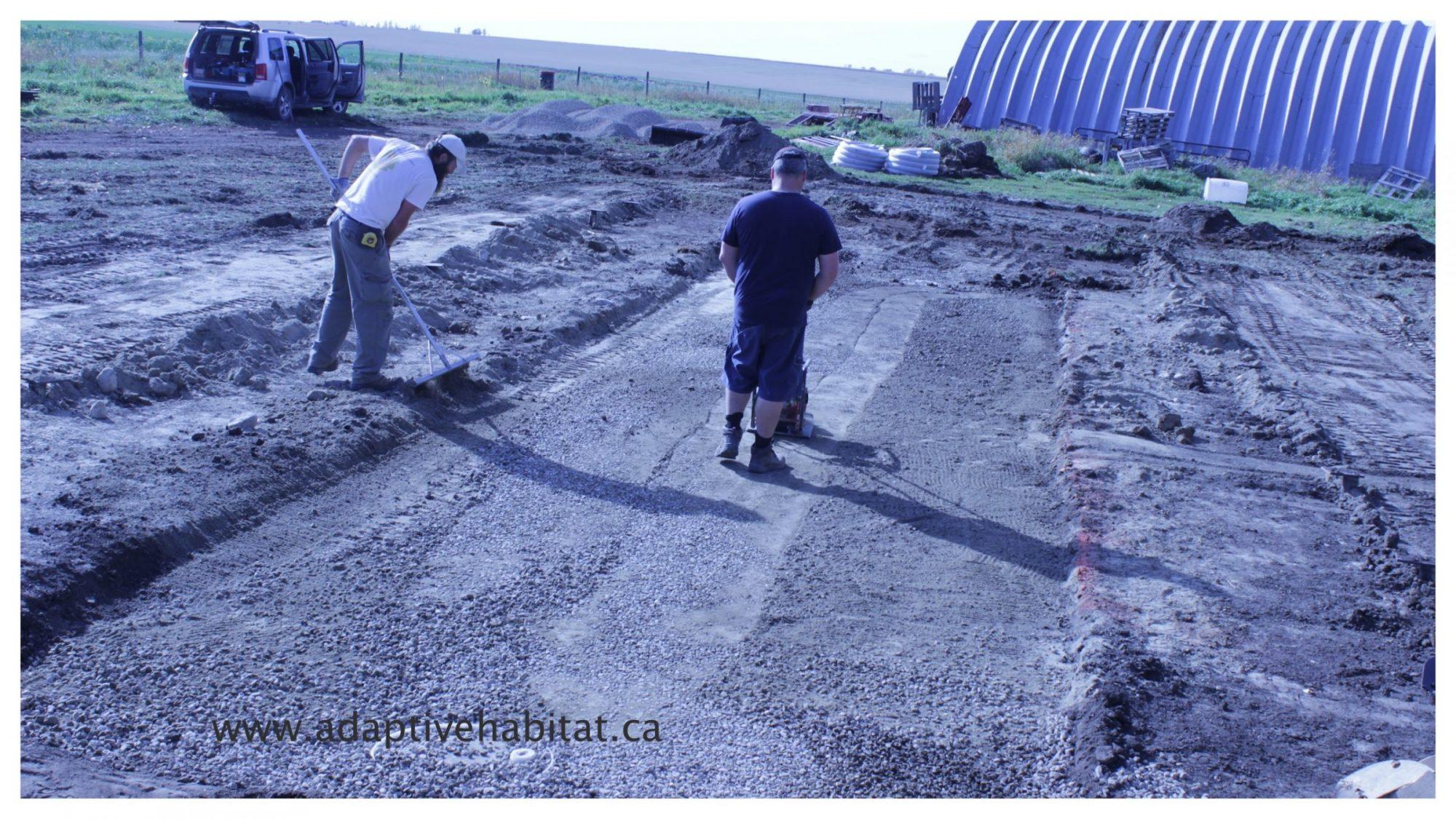 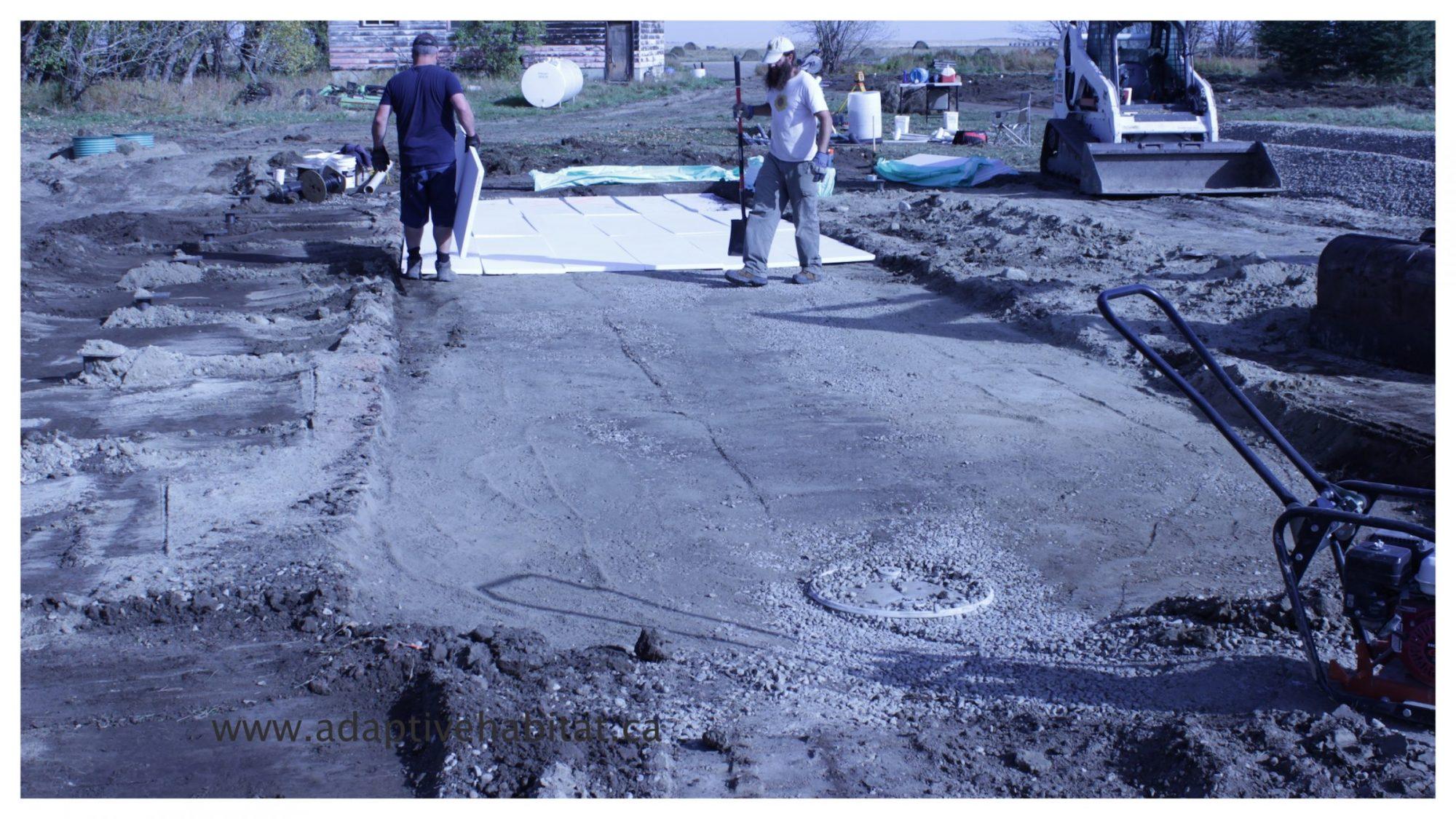 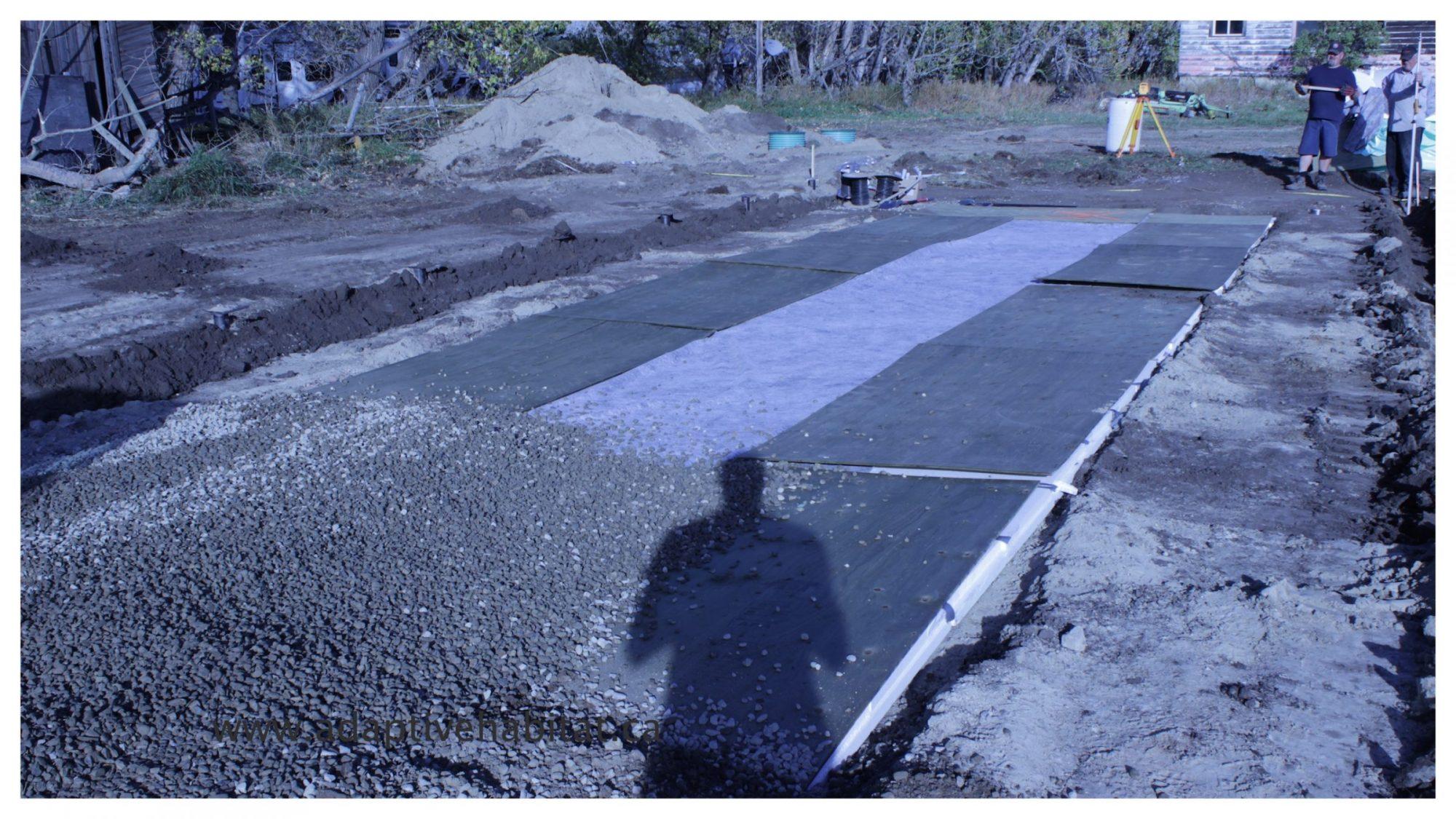 We will continue to monitor this AGS system to establish numbers for the actual amount of heat returned to the home, so we can provide some quantification on the amount of natural gas and money saved in heating bills. With what we are seeing right now (ground temperatures of 15 – 20 deg C) and some experience with other projects, we anticipate the results to be very positive.

The Groundswell Network Society Community Greenhouse (a project we have been involved with for the last few years) also has an AGS system that has been in operation for over 5 years. Despite the fact that this greenhouse is located in the Rocky Mountains, and has an average winter temperature of -10 deg C, the greenhouse interior no longer drops below 0 degrees C, with no supplemental heating,  because of the heat stored & being returned from the earth below.

I also already see an improvement in that the fan could easily be powered by a photovoltaic panel, which could eliminate any grid electricity required. Also, if the panel was sized correctly, it could be tuned and the control could be eliminated as well.

For those of you in warmer climates, you could use a variant system to cool your buildings in the summer and heat them in the winter to provide low-cost air conditioning.

I see a huge opportunity for these systems in similar mobile or RTM homes, greenhouses, conventional homes and commercial buildings. I look forward to seeing more of them get installed!

You mentioned that you were going to collect data for 3 years and continue to report on it. Maybe I missed it but I haven’t been able to find any updates since the install.

1) Was the system indeed successful and able to adequately provide the majority of the winter heat to the home?

2) Did it heat the house through February or did the heat run out before then?

3) In short, was it worth the trouble?

We are getting ready to dig for our foundation on a new residence and I am on the fence of whether to try this.

Hey Mike! Good on you for finding this old blog and wanting to follow up with Rob on the numbers. I’ll make a note to notify him about your questions.

I would love to hear about it too! I know this is a similar method to what is in the greenhouse. Hoping to have a build in the new year!

I’m storing this innovative concept in my brain for the next house we build, hopefully in the next 3 – 5 yrs.

Thank you, Rob! We poured a concrete floor several years ago for some folks building a round, straw bale house. They have a similar system but have, I think, 4 feet of gravel under the floor as the “heat sink”. What are your thoughts on using gravel compared to compacted soil for distributing and storing heat?

For a non-engineer like me, could you give a brief explanation of how the “variant” system would cool your building in summer and heat in winter…. Seems like some cooling in system above simply from taking heat out of attic but is additional cooling available? 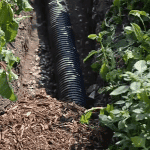 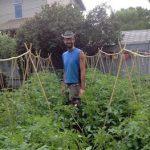