We have had the solar thermal system installed now for almost six months and it has performed flawlessly. Moreover our gas bills have never been so low, in fact most months we are paying more in service fees than we are in natural gas. I have included a two gas bills from January 2011 (before the solar hot water system was installed) and one in January 2012. The system was installed in late June of 2012 which is why you can see 1 -2 GJ reduction in the months of July, August and September. The full impact of the array will not be fully realized until we trial it for a complete year.

One of the additional benefits that we got by installing this system is we freed up a 4” duct to the roof. This duct used to convey the flue gases from the old hot water heater, but we no longer need it, as we now have a direct vent (out the side of the house). I have been eyeing this for a few months to use as a duct for solar hot air as supplemental heating for the house. This would be a simple retrofit and add a significant amount of space heat – for free almost (you have to pay for the power for the fan). If this works I will build a few more and install them in various places around the home and garage.

Check out a new short video we made, showing how the solar array went in. 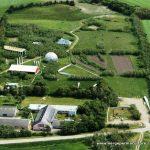