Jim Little, a born and raised Calgarian, has had quite the journey over the last decade. In 2013, Jim began taking drawing lessons. From having next to no training whatsoever, Jim’s natural talent blossomed, and was told by his instructor only 6 months into his lessons that he could be selling his prints. At the time, he was working as a software developer, with the role of designing user interface systems. While his job satisfaction steadily decreased, his love and passion for drawing increased – soon thereafter he realized that he was more than confident enough in his skills to pursue a full-time career as an artist, and now produces amazing photorealistic drawings.

Whilst now drawing on a full-time basis, Jim would fill his ears with various podcasts that delved into the subjects of culture, psychology, philosophy, and politics. Out of these podcasts, arose a primary concern of Jim’s: all of them focussed on problems, but solutions to these problems were left out of the discussion. As luck would have it, in mid-2019, Jim came across a talk that Piero San Giorgio gave to the United Nations; this talk would mark the first instance that Jim’s brain was introduced to the solutions-based world of permaculture. Jim quickly put his detective hat on and searched for ways in which he could get involved, and promptly signed up for Verge PDC’s – he is now a graduate of the online Verge PDC, and is currently undertaking the in-person Verge PDC.

Taking the PDC, Jim says, has fundamentally transformed the way he looks at the world. Primarily, the PDC has offered him hope by providing him the tools necessary to synthesize solutions to the worlds problems within a holistic framework. Furthermore, the PDC gave him the opportunity to volunteer some of his time at the Verge farm, where Jim has learned an incredible amount, and is sure to take forward in his bright future. Jim’s dream with regards to permaculture is to spread the word and ensure people (and himself!) are able to take control of their own supply chain with clever and insightful design.

About Drawings Without Borders

Jim’s philosophy and passion comes from the challenge of capturing all of the subtle details that reveal the distinct personalities of the subjects of his drawings. Taking the PDC, he says, has inspired him to implement the rich colours of nature into his work. As of now, Jim has received several accolades for his work, including:

Jim Little: Drawings Without Borders
We're Hiring a Permaculture Farm Intern. Get your application in before May 20th! 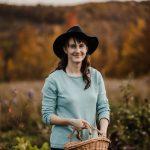