On our way back home from a consultancy, Takota Coen and I were talking about how brilliant permaculture is at solving problems, specifically when it comes to food security. After some productive exchanges we realized we were touching on an idea we haven’t heard too many people talk about: Living larders, biological food reserves that fly in the face of conventional food systems and can provide real, resilient food security for those who manage them.

A living larder is not a new concept, but it can appear novel in the 21st century because most of us rely entirely on products derived from annual crops grown through conventional farming systems. Living larders are not new because they are systems that many non-western indigenous cultures around the world have been cultivating for millennia. In his book Edible Forest Gardens, Volume 1, Dave Jacke stated the following:

Recent studies indicate that the “wild, untamed landscape” we imagine the earliest colonists found was, at minimum, strongly human influenced. In fact, the primeval forest was probably a managed ecosystem. Some authors go even further. They suggest that the eastern forest “was, and is (except in its remotest parts) a cultural phenomenon,” even before European Colonization. The nature peoples had widespread influence on their habitat besides the direct impacts of their farming.  They managed the forest to increase and diversify their food supply, and to improve their living conditions in general.”

Jacke goes on to note that the eastern part of what is now the United States may have been home to “9.8 to 12.25 million” native Americans, a far cry from standard estimates of one million when European colonization began.

How did the land support such a large population? Living larders were key. What many people don’t realize is that we are currently living “In Grave Danger of Falling Food.” This is the title of a great five-part series Bill Mollison did in the 1980’s on the state of the food system. I highly recommend watching it (Check out the video below). The irony is that the food system doesn’t need to be this way. Mollison once stated the following:

Though the problems of the world are increasingly complex, the solutions remain embarrassingly simple.”

Living larders are examples of these simple solutions. They can either be harnessed or designed – I’ll discuss these two different approaches in the next part of this series. But first, a definition: Living larders are pre-existing or designed cycles and niches in nature that are biologically living floral or faunal food sources humans can harvest when needed without having to be stored in traditional root cellars or larders.

The great thing is that permaculture provides us with the perfect tools to design these dynamic systems. 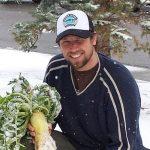