On September 17th, 2011 I attended the tenth international permaculture convergence (IPC 10) in Jordan… (which also happened to be my birthday). To read Part I of this series, click here, to read Part II click here.

As I sit here in the airport, I cannot help but feel hopeful about the future. The convergence was a great gathering of inspiring people from all over the world, who are all doing a great service for their communities.

In a way, Jordan can be seen as the canary in the coal mine for the rest of the world. Even though the climate is quite different than Canada’s, we can look to Jordan as an example of what can happen to a landscape, its weather system, and its soils when forests are replaced with mono-cultures.

During the ride to the airport, I spoke at length with the cab driver about the shifting weather patterns that he has observed over his lifetime. He told me that when he was a kid, there was a significant rainy season each year and that now they are lucky if they get a handful of rain events and a bit of snow. He believed that Jordanians were helpless to change this situation and that adapting to low rainfall would be the only solution moving forward. He also believed that the government needed to do more by building more dams and running more pipelines. These options are just band aid ‘solutions’, and don’t address the underlying problems.

As we continued on to the airport, we saw many examples of street trees. These trees are planted above the street on the side walk. They also happen to do a great job at draining water away, consequently wasting a significant water harvesting opportunity. We spoke at large about the different ways pavement could be used to harvest rain water, and he admitted that he had never looked at paved roads in that way before.

Amman, the capitol of Jordan, is covered in concrete homes, paved roads and a general assortment of impervious structures that could harvest water to support vegetative life. I suspect that a person, who wanted to make a great living in a place like Amman, could do so through water harvesting projects. They could easily justify their salary by showing how much water (and thus money) they could save for individuals. Hotels, resorts, condominiums and homeowners all spend a significant amount of their income on the purchase of water.  Amman is a fairy tale story just waiting to happen.

As I passed through the desert of Amman, I saw the same destructive pattern but on a much larger scale. In fact, the desert/wadi system in Jordan, reminded me of my time on the Baja Peninsula where there were short stints of rainfall, large, un-vegetated landscapes and massive drainage systems.

Much of the little water available is diverted into valleys and canyons of the surrounding sandstone mountains. It is in these water drainages that all of the opportunity for water harvesting lies. In the Permaculture Design Manual, Bill Mollison talks at length about dryland systems, with specific examples of how to slow, store and soak water into the landscape. Some examples include:

Terraces: Level benches cut into hillsides that are too steep for swales. These systems act like swales in that they infiltrate and pacify water on contour.

Inversed Shaded Gardens: Gardens that have shade cloth overhead and are below the elevation of paths in order to harvest all available water. In wetter regions of the planet, we use raised beds; in the desert, this wouldn’t work as the level of evaporation is too high. (Photo of GTD2 here)

Wicking Beds: Self-contained raised beds with built-in reservoirs that supply water from the bottom up.

Drip irrigation: Method of watering that allows water to drip slowly to the roots of the plant, thus combating evaporation.

Fencing is a tool that cannot be stressed enough in the desert! Young, emerging plants need to be protected. Fencing can help to remove the pressures of grazing animals.

One of the most important discoveries in desert re-greening efforts in the last 30 years was by a man named Tony Rinoudo in Niger, Africa. He discovered that many hardy desert trees are coppicable, so the majority of the tree is actually below the ground, invisible to the human eye. The trees usually emerge right after a rain event, and this may only occur a few times a year. If there are grazing animals in the area, they will eat any new growth as soon as it hits the surface. Fencing is an easy way of limiting disturbance until the tree is established enough to fend for itself. Once established, grazing can actually benefit the system.

Once water harvesting in the drylands is figured out, there is still plenty of work to do on the water cycle itself. In these dry regions, the sun can be thought of as the gas pedal of a car, and in the desert, it is pedal to the metal! Water on the other hand, is the gas, and if you run out of gas then you are going to stall. In the desert, stalling usually means death.

The best strategy is to ease off the gas pedal, and slow the sun down with shade and mulch strategies. Lessening the amount of sun can make the difference between success and failure, especially in gardens.  Gardens typically need shade protection from the south, east, and west sides as well as overhead protection in varying amounts. To start, suggested shade amounts are 95% on the west, 50% on the east and 50% overhead.

When planting new forest systems, it’s not always possible to protect all trees with shade cloth, so we have to use a different strategy.

Observation plays a critical role in reforestation efforts as we have to find species that are able to cope with the extreme desert conditions. These species will make up 90% of our first phase of forest succession. Because many of these hardy species may be considered weeds or not “useful” for humans, this strategy may seem counterintuitive, but when nothing else is growing, you plant whatever will survive. Examples of these trees include mesquite and desert hardy acacias.

Once these trees are established they start to dump mulch around themselves in the form of seeds, leaves and bark. This protects the soil and, in conjunction with the shade provided, starts to cool down the soil thus preserving soil moisture. Extra moisture helps to decompose the mulch and transform it into humus. Humus has been found to hold up to 400% of its weight in water which supports the trees even further.

Once the shade canopy is up and the soil building is underway, we can start to introduce trees further along in forest succession, like citrus, fig, pomegranate and guava. As these trees become established, careful adjustments in the canopy can be made to open it up if more sunlight is required. Trimmings from careful canopy pruning can be used as nitrogen rich mulch for the long term fruit trees. A stable forest canopy or overstory can create a much more pleasant human habitat. At this point, the system can also allow for careful grazing of sheep, goats and free-range fowl.

Deserts are on the run these days, and people armed with the right strategies and tools are needed to stand at the edge to keep them at bay and start pushing back. If we don’t get this right, who knows what the future could look like? Thankfully, we already have some amazing people working towards a better way. 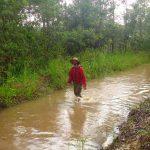