Takota Coen was born, raised, and now helps steward Grass Roots Family Farm, where his family has managed their 250 acres according to organic agricultural principles for almost three decades. After completing his PDC in 2012, Takota decided to come back to the family farm with a mission: To change the face of prairie agriculture. Since then, he and his family have completely redesigned their farm to include 16 ML of earthen water storage, three kilometres of swales, six acres of forest garden, alley cropping, holistic planned grazing, cover cropping, gravity fed irrigations systems and more.

Takota currently holds an additional PDC from the Permaculture Research Institute, a Holistic Management Certificate from HMI, and a Red Seal Certificate in carpentry.  He was named one of Canada’s Top Environmentalists Under 25 in 2015 and wrote a biweekly column called “The Path To Permaculture” in the Camrose Canadian. Under the tutelage of Rob and Michelle, Takota is working to empower other landowners with the tools and resources to design and implement resilient farms and ranches that are both ecologically sound and economically viable.

Grass Roots Family Farm borders the northeastern shores of Red Deer Lake near Ferintosh, Alberta, where Takota’s family has lived since 1984. After realizing the negative health and ecological effects of conventional farming, the farm abandoned synthetic fertilizers and biocides in 1988 and embraced the regenerative agriculture movement. The frameworks of holistic management, biodynamics, and permaculture now guide Grass Roots Family Farm’s stewardship efforts; in 2014, it was awarded the Canadian Farmer-Rancher Pollinator Award by the Canadian Federation of Agriculture.

Want to learn more about Takota and his family farm? 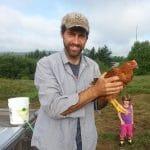