Lyme Disease and Permaculture Part III: Positive Change is All Your Fault New to Lyme disease? Need to get caught up on the series? Quick! Go check out parts one and two!

Now that you have an idea of why Lyme disease is spreading and a few things you can do to avoid it right now, it’s time to get into the meat of why you’ve been reading these articles on this particular website. Besides everyone at Verge being awesome I mean. [Brownie points awarded to Justin: 10.]

A full discussion of Lyme disease and Permaculture would take a book, but let’s see what we can accomplish in 1000 words or so.

There are two strategies for mitigating Lyme disease on scale larger than individuals (meaning tick checks, the right clothing, etc.):

Most people choose one of two specific approaches:

There’s a lot of unnecessary fear out there. Let’s check what Franklin Roosevelt would have said about that. We have options. We are mighty. And we can use that might for great deeds, big and small.

It’s hard to give the ever-sought specifics to a global audience. What works in Alberta won’t necessarily apply in Holland.  Here are a handful of broad ideas to help get you started:

Make your land inhospitable to ticks. To a tick this is the Sahara.

Eat the ticks or integrate something that will. Passing kill-rage to the next generation of merciless slayers.

Clarification on what kind of dog would fill the role described above: Those are just the broad strokes. The specifics, as always, depend entirely on your other goals, climate, the lay of the land, and so on. One final thing I’ll mention is to decrease the edge along your tick sector. There are lots of other places to expand edge and enhance habitats. The places full of ticks and other disease vectors aren’t good candidates.

That’s it. This series is over. The question is whether it has overstayed its welcome, like the X-Files, or if it died before its time, like Firefly. 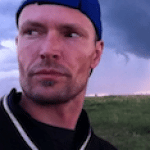