Stay tuned for details on his live-stream webinar, banquet and public talk!

Can’t make it to Joel’s 3 days of workshops? Don’t fret – we’ve got options for you! Read on for other opportunities to catch Joel – in person or from anywhere in the world! We will be posting more details and ticket sales for the event below in the near future. To sign-up for notifications when these events are announced, hit the button below & select “Joel Salatin Announcements”:

If you’re longing to catch Joel’s highly praised how-to’s for establishing and succeeding on your own farm but can’t get there in person, our webinar option might be just what the farmer ordered! Thanks to the wonders of technology, we are pleased to offer the opportunity to attend any one (or all three) of Joel’s day-long workshops from anywhere in the world. Tune in (and even ask questions) with this high quality video stream from the comfort of your own home.

The Sheer Ecstasy of Being a Lunatic Farmer: A Local Food Banquet in Partnership with Slow Food Southern Alberta

Slow Food Southern Alberta and Verge Permaculture join forces with local producers and chefs to bring you a tasty celebration of Alberta farming and food, while Joel Salatin performs his thought-provoking, encouraging and entertaining speech “The Sheer Ecstasy of Being a Lunatic Farmer”. The expression that birthed Joel’s book by the same title, this performance describes, with hilarious stories and drama, the difference between Polyface and today’s average farm. If you’ve ever wondered how a local, pasture-based, relationally oriented farm differs from industrial commodity-based machine-driven farms, this presentation takes away the mystery. With discussions ranging from ponds to people to politics, you’ll never think about food and farming the same way after listening to this self-described lunatic farmer!

Folks, This Ain’t Normal: An Evening With Joel Salatin

As our bustling city forges into the future, many Calgarians are looking to simpler ways and simpler times with questions about how to move forward. Lucky for us Joel, is a man with answers.  Based on his book by the same title, Joel will be bringing history, satire, and prophecy to curious and concerned Calgarians in his presentation “Folks, This Ain’t Normal”. While most North Americans seem to think our techno-glitzy disconnected celebrity-worshipping culture will be the first to sail off into a Star Trek future unencumbered by ecological umbilicals, Salatin bets that the future will instead incorporate more tried and true realities from the past. Ours is the first culture with no chores for children, cheap energy, heavy mechanization, computers, supermarkets, TV dinners and unpronounceable food.  Although he doesn’t believe that we will return to horses and buggies, wash boards, and hoop skirts, Salatin believes we will go back in order to go forward, using technology to re-establish historical normalcy.

Both sobering and inspiring, this performance empowers people to tackle the seemingly impossibly large tasks that confront our generation.  Historical contexts create jump-off points for the future–a future as bright as our imagination and as sure as the past.

Again, if you’d like to sign up for notifications of more information and ticket sales,  hit the button below & select “Joel Salatin Announcements”:

I will be tuning in for the live-webinar. Will it be available for later viewing as well? I have a group of people interested in watching however weekdays to not work well for them. Thank you for all you are doing!!!
Rachel

Hi Rachel – You will receive a digital copy of the workshop if you sign up for the Premium Livestream. 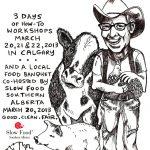 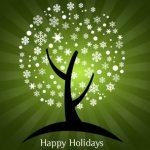 Unplugged over the holidays AND… a baby announcement!Community, Featured