4) Should we take a deep dive into the past and uncover the progress traps that we fell into and determine if we are in the midst of making similar one way decisions in almost every human domain in this era of disruption? 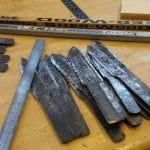