Lyme Disease and Permaculture Part I: Be Afraid! Or, You Know, Just Get Educated.

Man, it seems like Lyme disease is everywhere these days, doesn’t it? Even William Shatner is trying to raise awareness about it now.

So how do we cut through the horror stories and general climate of fear to really understand why this life-altering disease is crawling to the forefront? And what can you do to stop its seemingly unchecked spread before it consumes your entire family in a bacterial conflagration?

First, don’t believe the media drama and their constant talk of doom. We can do a lot to mitigate against Lyme disease.

Second, read this Verge blog series about Lyme disease and Permaculture. It’s a trilogy of topical humour and tantalizing information. By the end you’ll be ready to strap on your crimson headband and take your chances in the jungle. (See? Topical.) Lyme disease has been getting a lot of attention the past few years. The information ranges from factual to ridiculous, the tone from entertaining to hysterical. Beneath most of the news stories is one of two messages:

Scores of Lyme disease sufferers — including yours truly — can attest that what’s happening in real life is somewhere between apathy and terror. We, as individuals and communities, can take appropriate action to deal with Lyme disease.

The latest Lyme happenings on the national stage is Bill C-442, introduced by Green Party Leader Elizabeth May. The legislation says that the federal Health Minister has to get together with the provinces, the medical community, patient groups, and other experts to create a national Lyme disease strategy. (I don’t know what that means either.)

I once surveyed a handful of doctors and asked them if the release of thermonuclear weapons should be authorized in the battle against ticks*. I received a unanimous negative in response. Before you ask: yes, I’m brain damaged. But that’s not why I inquired. As rational as we are on paper, humans have a habit of overreacting. And damn the consequences! It makes one wonder what will happen now that Bill C-442 is law. Pictured above: A summary of human reactionism.

When our society recognizes Lyme as the Malaria of North America** we will demand drastic action to make up for decades of ignorance and obfuscation. Eventually the government will have no choice but to deliver. It’s easy to imagine what might result.

How many thousands of litres of acaricide will we spray over our country? How many hectares of habitat will we annihilate to root out “the enemy”? How will the dominoes fall? The tragic assassination of Archduke Ferdinand leading to the Great War comes to mind. Or people watching the first Transformers film resulted in Michael Bay making more films. Our barbarism is without boundaries.

That’s why I’m so excited. We are without boundaries. The fact that we’ve chosen to wear the chains of barbarism is irrelevant when weighed against another option: we have the ability to reforge those chains into the tools we need to create something better. Now is our chance to demonstrate how to deal with Lyme disease in positive, impactful ways. To prove the alternative exists and that it works. We don’t have to just live with the disease or submit to destructive plans.

First we have to look at the foundational causes and ideas of these problems so we can understand rather than just know.  History is a good place to start. The full scope of Lyme disease history is beyond any single blog post, especially considering its extraordinary politicization since the 1970’s.

To learn that complete and nuanced history read the book called Cure Unknown. For the briefest idea that hits all the highlights, look at this infographic: Looking at our own history nook, why is Lyme on the rise? The way I see it, there are three reasons.

Reason number one: How many hook-wielding teacup pigs do you see below? Don’t rush. They’re tough to spot. There’s 19. You need to know what you’re looking for to find them. Likewise, as Lyme awareness and willingness to investigate it goes up, so do the confirmed instances of the disease.

Reason number two: climate change. I’m not one of those people who blames global warming for everything (since I also blame Michael Bay), but milder weather means more ticks. We need a long annual deep freeze to control their population. It’s true that adult ticks can survive some cold. Small rodents (tick food) and young ticks, however, take to extreme cold with the same success as these guys becoming arborists:

* No, I’m not kidding. Yes, it’s fun to ask doctors those kinds of questions.

** Despite your instincts, this is a terrible name for a boxer. 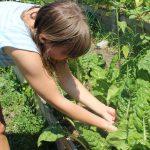 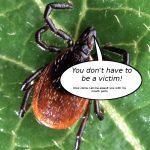 Lyme Disease and Permaculture Part II: You Do Not SuckCommunity, Design, Featured, Why Permaculture?